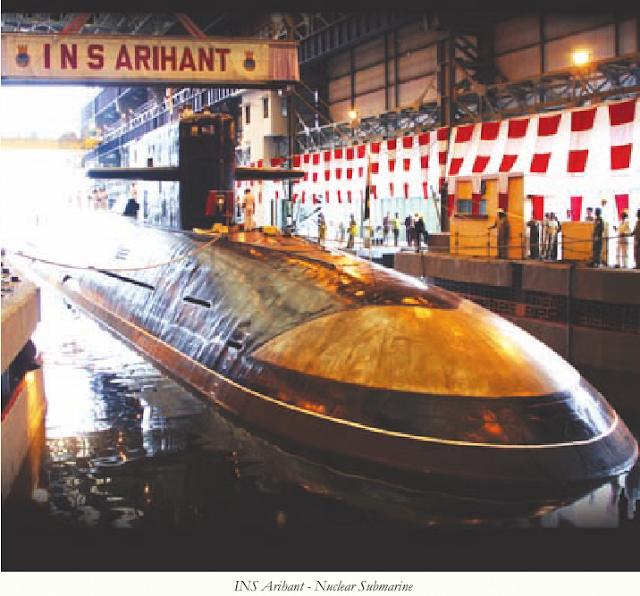 
The Arihant means India will join the U.S., Russia and China as the only countries that can target enemies with nuclear weapons delivered by land, air or sea. Fear is China might help North Korea, Pakistan develop similar capabilities, and that South China Sea friction will increase.


Nc Bipindra, BLOOMBERG NEWS
26 February 2016
India is close to becoming the world’s sixth country to put a nuclear-armed submarine into operation, a move that would give it a leg up on neighboring Pakistan and intensify a race for more underwater weapons in Asia.
The 6,000-ton Arihant, developed over the past three decades under a secret government program, is completing its final trials in the Bay of Bengal, according to a senior navy officer who declined to be identified because he’s not authorized to speak about the program. The vessel will be operated by the navy yet remain under the direct control of India’s Nuclear Command Authority headed by Prime Minister Narendra Modi.
The deployment would complete India’s nuclear triad, allowing it to deliver atomic weapons from land, sea and air. Only the U.S. and Russia are considered full-fledged nuclear triad powers now, with China and India’s capabilities still largely untested.
India’s move may prod China to bolster its undersea arsenal and assist nuclear-armed allies Pakistan and North Korea in developing similar technologies. That risks potentially more dangerous altercations in Asia’s waters, where territorial disputes have contributed to a region-wide naval buildup.

"You will probably see more friction in maritime sub-regions such as the South China Sea or the Bay of Bengal, which China and India increasingly view as their future bastions" for nuclear ballistic-missile submarines, said Iskander Rehman, a postdoctoral fellow at the Washington-based Brookings Institution’s foreign policy program. "Tensions will no doubt arise from subsurface encounters in such areas, particularly as both conventional and nuclear submarines continue to proliferate throughout the Indo-Pacific region."
On Nov. 25, the Arihant reportedly test-fired a training missile, the Indo-Asian News Service reported, citing officials it didn’t identify. Defense spokesman Nitin Wakankar didn’t respond to questions seeking comment on the submarine’s deployment or the test.
Both India and China espouse a no-first-use policy on nuclear arms. Their efforts to arm submarines with atomic weapons are theoretically aimed at preventing the
outbreak of war by discouraging enemies from attacking. Ballistic-missile submarines are considered to have played such a deterrent role in the Cold War.

The U.S., UK, France, Russia and most recently China now have nuclear-armed submarines in operation. The 110-meter long Arihant would be harder to detect than India’s nuclear weapons on land and air, giving it a "second-strike" capability to retaliate powerfully against an enemy who managed to destroy the rest of the arsenal.
China began combat patrols of an armed nuclear-powered submarine last year, the Washington Times reported in December, citing the U.S. Strategic Command and Defense Intelligence Agency. While China hasn’t made a formal announcement, and U.S. officials haven’t confirmed that nuclear-tipped JL-2 missiles were on board the submarines conducting patrols, they have no evidence that the vessels weren’t armed.

"Given China’s known capabilities and their efforts to develop a sea-based deterrent, in absence of indicators to the contrary, it is prudent to assume that patrols are occurring," Navy Capt. Pamela Kunze, a spokeswoman for the Strategic Command, told the Washington Times.
Even so, neither India nor China has quite reached the technical prowess to give them a credible nuclear deterrent. Their submarines are loud and easily detected, making them an unlikely second-strike asset, the Lowy Institute for International Policy said in a September report.
Potentially more worrisome is that neither Pakistan nor North Korea subscribe to a no-first-use policy, and there are signs that both nations are pursuing cruder methods of deploying nukes at sea.
Pakistan, North Korea
Last year, Pakistan finalized a deal to buy eight Chinese conventional submarines, raising concerns that they could be equipped with riskier nuclear-tipped cruise missiles. North Korea also claimed to have tested a submarine-launched missile and said that it had developed technology to mount a nuclear warhead on a missile.
"There will likely be a long phase of initial instability as China and India start deploying nuclear missiles on submarines," the Lowy report said. "Chinese and Indian nuclear-armed submarines – along with possible Pakistani and North Korean units – may remain detectable by adversaries, making their activities unpredictable in times of crisis. Moreover, these supposedly stabilizing new forces may worsen wider maritime tensions."
China boasts at least 62 submarines, including four capable of firing nuclear ballistic missiles, according to the Pentagon. China’s construction of artificial islands, radar facilities and runways in the South China Sea may be aimed at using the territory as a base for its nuclear ballistic missile submarine fleet, the Lowy report said.

The Arihant will be India’s first nuclear-powered and armed vessel that has been designed and built at home. The country is believed to have begun work on it in the 1980s with help from the Soviet Union, particularly on the vessel’s miniaturized reactors. In 2012, India also leased a nuclear-powered submarine from Russia under a 10-year, $1 billion contract. The two countries are negotiating a deal to lease another one, the Pioneer reported this month, citing Alexander M. Kadakin, Russia’s ambassador in New Delhi.
Despite numerous setbacks, India is making progress on developing the weapons to arm the undersea vessels. In 2013, India test-fired an underwater ballistic missile with a range of 750 kilometers, the Hindu reported, citing an unidentified scientific adviser to the defense minister. Last September, India’s Defense Research and Development Organization publicly acknowledged having readied a submarine-launched ballistic missile with a 3,500-kilometer range at an awards event for military scientists attended by Modi.
India needs to show the world it can capably and effectively operate the nuclear-armed submarine, said Jon Grevatt, Asia-Pacific defense-industry analyst for IHS Jane’s. The “important milestone" is part of a bigger strategy to ensure its security, he said.
"The Arihant is a stepping stone for India," he said. "I don’t think it will alter the balance of power in the region unless India has a fleet of four or five such submarines."
Posted by Carl at 4:03 PM