Is Titan submarine the most daring space mission yet? 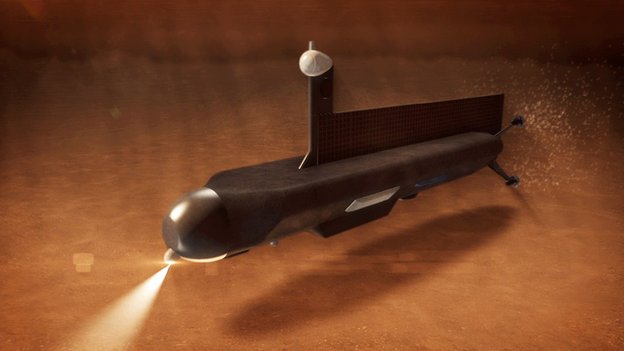 Dropping a robotic lander on to the surface of a comet was arguably one of the most audacious space achievements of recent times.
But one concept mission being studied by the US space agency could top even that.
Scientists are proposing to send a robot submarine to the oily seas of Saturn's moon Titan. The seas are filled not with water, but with hydrocarbons like methane and ethane.
These compounds exist in their liquid state on the moon, where the temperature averages -180C.
The plan is funded by an initiative called Nasa Innovative Advanced Concepts (NIAC), where researchers are encouraged to think out of the box.
"That's quite liberating," says the scientist behind the project, Dr Ralph Lorenz, who is outlining the concept here at the Lunar and Planetary Science Conference (LPSC) in Texas. 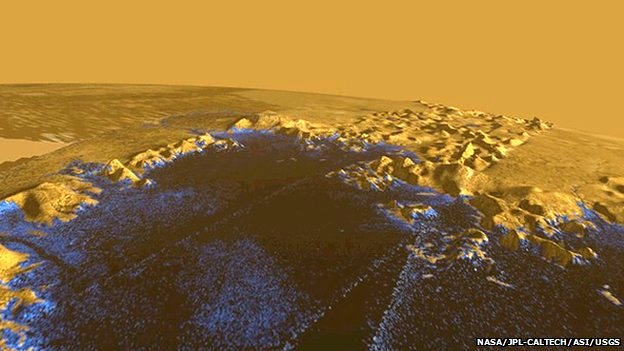 Titan's north pole is a land of hydrocarbon seas and lakes

"You can take a step back and really let your imagination run riot."
But Dr Lorenz believes the mission is eminently achievable with the right resources, timing and technology.
Unmanned underwater vehicles (UUVs) are now widely used for military purposes, by search teams, in oil exploration and scientific investigation. So existing technologies could be adapted for use on another world.
One of the most striking aspects of the proposal is a plan to deliver the sub in a variant of the US military's secretive mini-space shuttle, the X-37B.
The sub would fit in the payload bay of the unmanned shuttle, with the stack then launched on a rocket. Once at Titan, the shuttle and its payload would glide down through the moon's soupy atmosphere.
Deep-freeze
The sub could be deployed in one of two ways. The X-37B could open its payload bay doors whilst in flight, jettisoning the robotic sub.
The submersible would then open a parachute and splash down in the sea. This method has been used before by the US military to deploy a bomb called the MOAB.
Alternatively, the shuttle could ditch in the sea, opening its doors to deploy the sub before sinking.
Titan resembles a deep frozen version of Earth, making it an attractive target for exploration. It was visited by the European Huygens probe, which touched down on the surface in 2005.
A mission called the Titan Mare Explorer (TiME), in which Ralph Lorenz was involved, would have returned there with a floating lander that gathered data from the sea surface. 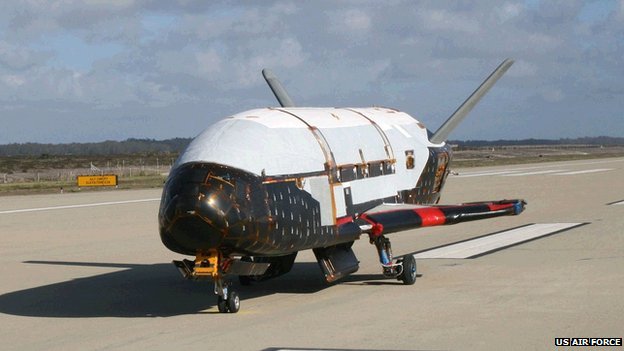 TiME was one of three finalists in the selection process for a Nasa low-cost Discovery mission, but eventually lost out to a Mars proposal called InSight. The new Titan concept combines some of TiME's science objectives with others enabled by the use of a submersible.
"You can do everything that a mission like TiME could do, particularly at the shoreline and measure the weather and the composition at the sea surface, measure the waves," Ralph Lorenz tells me.
"But it also lets you carry out detailed mapping of the sea floor, where there's a rich buried record of Titan's climate history."
Fizzy drink
Around shorelines on Titan are sediments left behind when liquid hydrocarbons evaporate; they suggest sea levels on the moon have periodically risen and fallen.
Indeed, while the seas are today concentrated in the moon's far north, natural cycles determined by the properties of Titan's orbit may cause these bodies of liquid to jump between poles every 30,000 years.
A sub could shed light on the basin in which the seas lie, including the possibility that it's a giant eroded impact crater.
The mission might see layering in the liquid column like that seen in Earth's Black Sea, where a salty, oxygen-poor layer exists beneath fresher (though still brackish) surface waters. 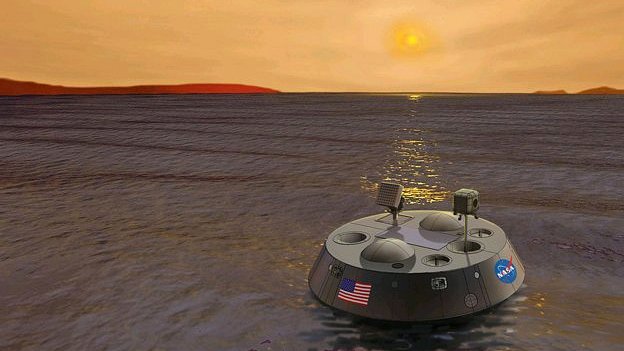 "One could imagine that kind of compositional layering in Titan's seas; you may have more ethane-rich liquid at the base and a 'fresher' methane rich layer at the surface. But maybe tidal and wind-driven currents are enough to stir everything up and mix it."
The $100,000 Niac study didn't identify instruments to be carried by the torpedo-shaped vessel. But sidescan sonar, a camera, and a seafloor sampling system are obvious candidates.
However, operating a sub in Titan's same-but-different environment presents unique challenges. For example, military submarines face a problem called cavitation, where the propellers cause bubbling that's audible to sonar. This can give away their presence to the enemy.
If Titan's seas are methane-rich, and have nitrogen dissolved in them (as scientists think), changing the temperature of the liquid hydrocarbon by just a few Kelvin could cause the nitrogen to come out of solution. This means the sub's system for getting rid of waste heat would cause fizzing that might interfere with sonar measurements.
But Dr Lorenz says tweaking the design of the heat rejection system, or using the sonar when the sub is at rest could help mitigate.
Above us the waves
Communications are also a vital consideration. TiME would have taken advantage of a geometric window of opportunity when Titan's north pole was pointed towards Earth, allowing direct communication with our planet.
But as the end of the decade approaches, Earth gets lower and lower on the horizon - making it more difficult to send data directly. So the submarine mission is being targeted for 2040 - the next point when the direct mode becomes possible.
To save everyone the wait, an orbiting spacecraft could accompany the sub to Titan in order to relay data to Earth. This would enable the mission to launch at any time, but also add considerable cost.
Another crucial factor is power. Spacecraft that stay within the inner Solar System can use solar panels to generate electricity.
But missions venturing beyond the asteroid belt need radioactive power generators, usually fuelled by the decay of plutonium-238. However, the US stopped production in the 1980s and supplies have been running out, causing consternation within the planetary science community.
Without this radioactive fuel, outer Solar System destinations like Titan are shut down to exploration.
TiME was to have used a novel power system called an Advanced Stirling Radioisotope Generator, which would have made the most efficient use of valuable remaining plutonium-238.
But its development was hit by delays, and the project was eventually placed on ice in 2013 - when the US officially re-started plutonium production.
"If TiME had been selected, we'd be launching 13 months from now. It was on the path to implementation... it was a real thing," says Dr Lorenz.
He estimates that between $5m and $10m were spent on its development. But there's now the potential to send a lander that can dive as well as float.

Saturn's biggest moon will continue to fascinate and inspire, making a return inevitable. And when we do go back, it may just be with a submarine.
Posted by Carl at 9:07 AM