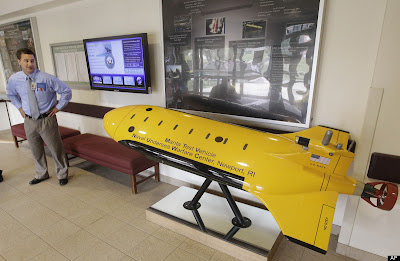 The U.S. navy and other states including China are already known to be carrying out extensive research into underwater drones.


David Connett, The Independent
27 December 2015
Britain's independent nuclear deterrent could be torpedoed by an increasingly sophisticated breed of underwater drone, a leading defence expert has warned.
Rapid advances in underwater drone technology – autonomous underwater vehicles that can be controlled by ship- or land-based operators – threaten to make the controversial Trident nuclear submarines vulnerable, according to Paul Ingram, the chief executive of the British American Security Information Council (Basic).
Submarines have traditionally been seen as capable of providing stealth and invulnerability to pre-emptive attacks. The current requirement for Trident replacement subs is for them to operate as near to silently as possible.
However, a revolution in underwater drones, as well as advances in sonar, satellite and other anti-submarine warfare systems, mean that even totally silent submarines are likely to become detectable. Some sensor technologies can detect large submerged objects by monitoring small movements of surface water.
Experts warn that as the capabilities of detecting systems improve and their cost falls, large-scale remote and potentially autonomous sensor deployments become possible. The result is that the world's oceans will become increasingly transparent, seriously calling into question the UK's heavy reliance upon the Trident submarine programme for its nuclear deterrence.
"There is a major transition taking place in the underwater battle space and it is far from clear how the new submarine will be able to evade detection from emerging sophisticated anti-submarine warfare capabilities," Mr Ingram said.
The revolution seen in aerial drone capabilities in recent years was likely to be extended to underwater craft, he added. A U.S. study recently reported that up to 50 aerial drones, controlled by one operator, had "swarmed" in a simulated co-ordinated attack. New algorithms, or mathematical formulas, to command and control much greater drone numbers are already being developed. Similar advances in underwater drone operation would make it harder for submarines to escape detection, he said.
The U.S. navy and other states including China are already known to be carrying out extensive research into underwater drones.
"With satellite surveillance able to look further and further into the water, coupled with the possibility of 'swarming' underwater drones which are likely to become cheaper and cheaper to produce, it raises serious questions about the wisdom of putting all your nuclear weapons on board a submarine," he argued. "The only purpose for doing that, it is claimed, is to make them hard to detect, which could well be impossible to achieve by the time the new Trident programme is launched."
The Basic think-tank is concerned by the lack of informed public debate about Trident. "The worrying thing is that nobody is debating this. It is an issue that nobody wants to talk about," Mr Ingram said.
"Campaigners against Trident don't want to talk about it because it's not about the purity of their anti-nuclear arguments. Those in favour of maintaining a nuclear deterrence do not want to talk about it because if the seas become transparent then the sense of putting all of our nuclear weapons in relatively slow moving platforms such as submarines will pose fresh difficulties," he said.
Military experts point out that the Royal Navy has long been involved in "cat and mouse" warfare – with Germany during two world wars and then with the Russians during the Cold War and beyond. They insist that underwater drones are but the latest tool in a race between submariners and their detectors.
In January, Carol Naughton, of the non-proliferation group British Pugwash, will launch a research project into the appropriateness of Trident as a platform for the UK's nuclear weapons capability.
"We are in danger of embarking on a major spend that will not only fail to deliver the invulnerability required of the proposed deterrent system, but is also likely to add a worrying degree of instability into the nuclear weapons situation," she said.
Last month the Prime Minister revealed that the strategic defence and security review (SDSR) had put the cost of the four subs at £31bn, up from £25bn nine years ago. The review said a contingency fund of £10bn would be set aside, suggesting the MoD anticipates the costs could rise still further.
The first sub is not due to come into service until the early 2030s.
Posted by Carl at 10:07 AM