Scientists are developing an ultra-fast, underwater vehicle inspired by the octopus, which they say could revolutionise sea passenger travel.
The robotic vehicle, being developed in Southampton, uses the aquatic animal as inspiration for a faster and smoother way of moving in the sea, according to the BBC..
Like an octopus, it inflates with water then rapidly deflates by shooting the water out through its base.
The speed is the equivalent of a car going from 0 to 60mph in one second.
Dr Gabriel Weymouth, lead author of the study, said in contrast, a "submarine has to travel for miles to get up to full speed".
The project, led by a team at the University of Southampton, is currently centred around a remote-controlled prototype, built using a 3D printed skeleton with no moving parts and no energy storage device, other than a thin elastic outer hull.
The speed achieved "is unprecedented in man-made underwater vehicles," the university said. 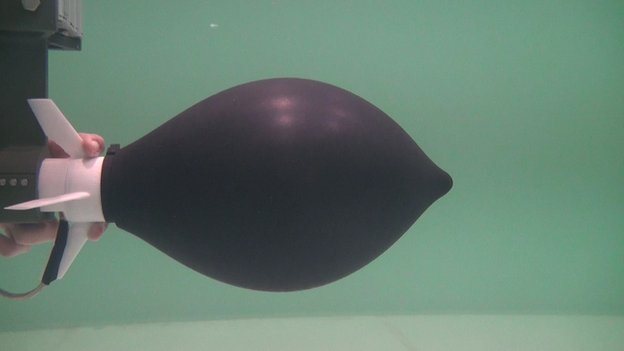 The vehicle inflates with water then rapidly deflates by shooting the water out through its base
Mr Weymouth said, in future, this method of propulsion could be applied to creating underwater passenger vehicles, which would be much faster than floating vessels such as ferries.

The goal for the more foreseeable future, however, is to develop vehicles for the purpose of underwater exploration that are easier to manoeuvre around obstacles such as coral reefs and off-shore wind farms.
Posted by Carl at 3:53 PM