Undersea reserach and development has been a distinct U.S. military advantage since the end of WWII, but commercial and scientific interest in offshore resources is prompting a rapid expansion and diffusion of undersea study and expertise. American undersea forces will likely become more vulnerable to inadvertent detection by civilian and foreign entities, while rival military and non-state forces could more easily access and incorporate new technologies in their undersea sensors, unmanned vehicles, and weapons.

Today, many American leaders assume quiet U.S. submarines can access almost any ocean area, even those defended by enemy A2/AD systems. New ASW (anti-submarine warfare) technologies and improvements to non-nuclear undersea platforms, however, will likely enable adversaries to complement their surface and air A2/AD networks with undersea surveillance and attack systems. These may not have the reach of anti-ship ballistic missiles or modern surface-to-air missiles, but they have the potential to make the undersea littorals of a potential adversary an increasingly denied zone. Consequently, unless U.S. forces adapt to and lead the new competition, the era of unrivalled U.S. undersea dominance could draw to a surprisingly abrupt close.

* new undersea “battle networks.” New long-range sensors, such as LF active sonar or wake detection, and emerging undersea communication capabilities will enable the development of new undersea fire control networks analogous to those using radio signals in above-the-surface warfare. For example, long-range ASW weapons such as a missile with a CVLWT warhead could be networked with long-range sensors to create an effective standoff ASW capability that delays or drives off submarines by exploiting their inherent limitations in speed, situational awareness, and self-defense.

* Disruptive technological shifts. With computer processing power continuing to rapidly increase and become more portable, dramatic breakthroughs are imminent in undersea sensing, communications, and networking. Advancements are also underway in power generation and storage that could yield significant increases in the endurance, speed, and capability of unmanned vehicles and systems. These improvements would compel a comprehensive reevaluation of long-held assumptions about the operational and tactical employment of undersea capabilities, as well as the future design of undersea systems. 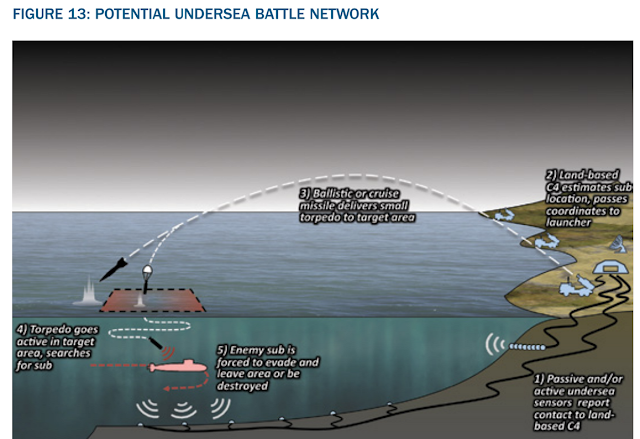 The ability of large UUVs and submarines to conduct and coordinate operations will improve with the introduction of new weapon, sensor, and communication systems. For example, the U.S. Navy is fielding the Common Very Lightweight Torpedo (CVLWT), which is less than a third the size of the smallest torpedo currently operated by the fleet. Although the CVLWT has a short range, large UUVs could carry substantial numbers of them as offensive weapons and exploit the UUV’s quietness to position the torpedoes close to a target. CVLWTs could also be employed as active defense weapons by submarines. Similarly, small, unmanned air vehicles (UAVs) such as the Navy’s Experimental Fuel Cell (XFC) UAV have relatively short endurance but can be launched by submarines or UUVs close to an adversary’s coast. They can exploit the ongoing miniaturization in electro-optical, infrared, and radar sensors to conduct surveillance or electronic warfare missions, providing targeting information directly via line-of-sight to a submarine or strike aircraft in the vicinity. Such systems could even carry warheads and be used as loitering, anti-radiation homing weapons to attack enemy air defense radars.

The Office of Naval Research's Large Displacement Unmanned Underwater Vehickl Innovativ Naval Prototype (LDUUV INP) program will develop a large unmanned submersible able to conduct missions longer than 70 days in open ocean and littoral seas. LDUUV will be launched from a pier or a variety of platforms, including the Littoral Combat Ship (LCS). The craft's missions will include ISR, acoustic surveillance, Anti-submarine Warfare, mine counter-measures, and offensive operations.

The vehicle's manufacturing and development phase will begin in 2015 with testing planned for 2018. According to the Navy's ISR Capabilities Division, LDUUV will reach initial operating capability as a squadron by 2020 and full rate production by 2025. 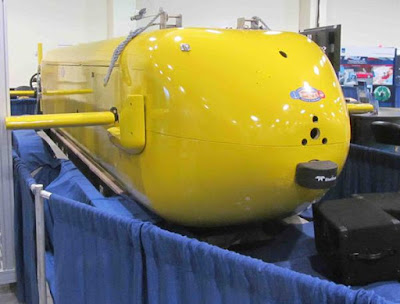 On 20 July 2012, Hamilton Sundstrand was awarded an $18 million contract to develop an energy-dense air independent power system for the program.

Today's torpedoes have an effecdtive range of 10 miles.  lA group has delivered a 200-mile propulsion system for torpedoes.

A second development effort is to take the Tomahawk Land Attack Missile (TLAM) and create a “multi-mission weapon” capable of striking land or at-sea targets. The importance is twofold, Connor said. First, submarines do not know what fight they may encounter when they deploy, and having a multi-mission weapon would create efficiencies and a boat better prepared for whatever situation arises.