From News Big Future/21 Feb. 2015
Advances in big data and new detection methods are on track to fuse with the anti-access/area denial (A2/AD) ambitions of nations like China and Russia which could force naval planners around the world  to go back to the drawing board.
America's superiority in undersea warfare is the product of decades of research and development, a sophisticated defense industrial base, operational experience, and high-fidelity training. This superiority, however, is far from assured. U.S. submarines are the world’s quietest, but new detection techniques are emerging that do not rely on the noise a submarine makes, and that may render traditional manned submarine operations far riskier in the future.
America’s competitors are likely pursuing these technologies while also expanding their own undersea forces. To sustain its undersea advantage well into this century, the U.S. Navy must accelerate innovation in undersea warfare by reconsidering the role of manned submarines and exploiting emerging technologies to field a new “family of undersea systems.
SOSUS, an acronym for Sound Surveillance System, is a chain of underwater listering posts located around the world in places such as the Atlantic Ocean near Greenland, Iceland and the United Kingdom — the GIUK gap, and at various locations in the Pacific Ocean. The United States Navy's initial intent for the system was for tracking Soviet submarines, which had to pass through the gap to attack targets further west. It was later supplemented by mobile assets such as the Surveillance Towed Array Sensor System (SURTASS), and became part of the Integrated Undersea Surveillance System (IUSS).
China is developing their own version of SOSUS with an undersea listening network.
Historical analysis shows that defences against submarines do not have to kill the submarines to be effective. So long as the submarines spend a lot more time to evade then the submarines are not performing their missions.
Bryan Clark, senior fellow for the Center Strategic and Budgetary Assessment, for lays out the problem in more layman's terms:
The ability of submarines to hide through quieting alone will decrease as each successive decibel of noise reduction becomes more expensive and as new detection methods mature that rely on phenomena other than sounds emanating from a submarine. These techniques include lower frequency active sonar and non-acoustic methods that detect submarine wakes or (at short ranges) bounce laser or light-emitting diode (LED) light off a submarine hull. The physics behind most of these alternative techniques has been known for decades, but was not exploited because computer processors were too slow to run the detailed models needed to see small changes in the environment caused by a quiet submarine. Today, “big data” processing enables advanced navies to run sophisticated oceanographic models in real time to exploit these detection techniques. As they become more prevalent, they could make some coastal areas too hazardous for manned submarines. 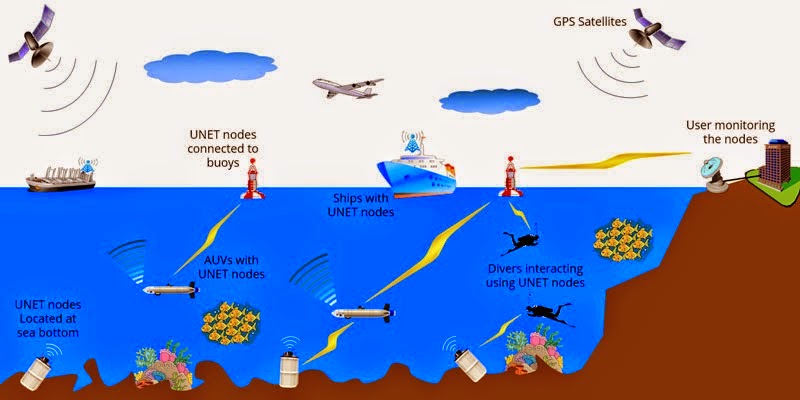 Singaporean developed and deployed UNET naval surveillance system
Posted by Carl at 9:22 AM